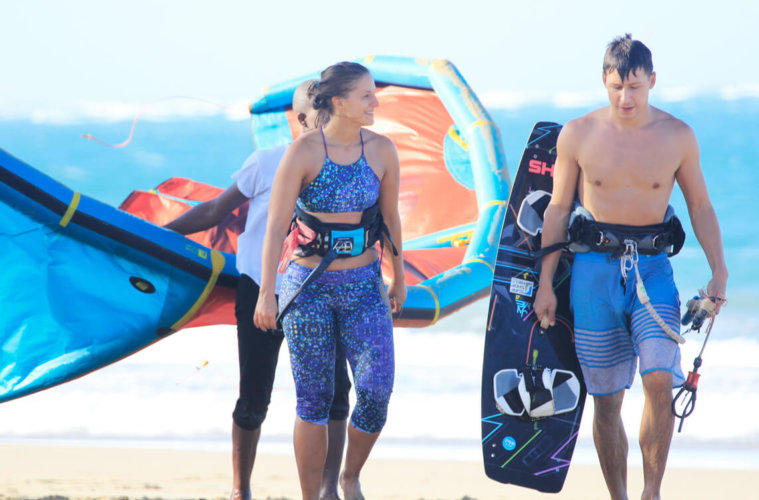 My favorite kite partner in crime is my brother. There is no one that I can push myself with to new horizons as much as with him! Here is our recap from our last escape to one of our favorite playgrounds: the kitesurf siblings shredding in Cabarete!

The story behind the kitesurf siblings video

The video was filmed during our annual family christmas holiday in Cabarete, Dominican Republic. We have a new family tradition that is only a few years old: escape the winter cold and spend christmas under palmtrees at windy and sunny destinations.

It wasn’t always like that. Especially the relationship with my brother changed a lot since we both found a passion that united us again: kitesurfing. 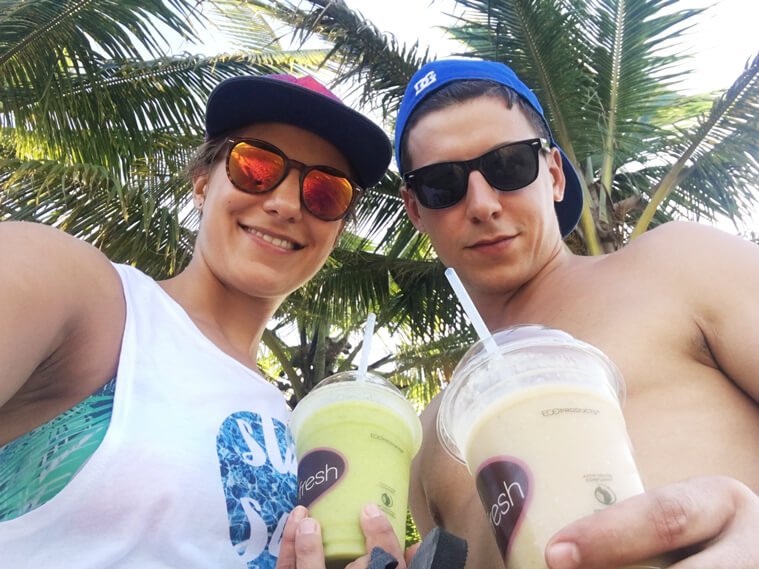 How it all started: kiteboarding brought us closer together

When I moved out from home, my brother and I loved to fight about random stuff. There is a pretty funny video (at least when watching it now) of me throwing empty beer cans at him and him throwing a plastic chair at me (nobody got hurt) during our holiday. I think I was 13 years old and my brother 10. That day my cousin told us: “You guys are only trying to be close to each other and that’s your way of showing your love.” I thought he was wrong. SO WRONG.

In the next years we wouldn’t spend much time together since we weren’t really interested in each others lives that much. I moved to Italy to study Design and my brother kept on living in Munich. We didn’t keep contact neither did we do much when I was back home for a weekend visit. It all changed after learning kitesurfing together in Cabarete.

When I graduated at university and my brother finished high school, my mom gave us the best graduation present ever: a holiday in Cabarete in Dominican Republic. Long story short: without ever having heard about kitesurfing we both ended up learning it and were hooked from the very first time we went bodydragging and did the superman move.

I remember us walking back from Kite Beach to Cabarete town after our 3-week-holiday. We just said goodbye to everyone at the kite school where we had just learned kitesurfing.

My brother was silent. So was I. We walked on the beach as if we were on our way to hell. At some point my brother stopped and said: “I’ll come back to Cabarete, I’ll live here!” All I thought was: “Oh I wish I could do it as well but what will my friends say/how will my resume look like when I go travelling after finishing university instead of getting a job/what will my mom say…”

One simple offer that changed everything

Ten minutes earlier the owner of the kite school told my brother he always needed German-speaking kite teachers and that he could come back anytime if he was into it. I was joking and telling him he surely needed female support as well. Thoughts were rambling in my mind.

I thought about this little paradise that Cabarete was to me, how it made me feel, the kind of person I was becoming in these surroundings. At the same time I thought about my future – I just finished my studies and now it was the time to get a proper job. 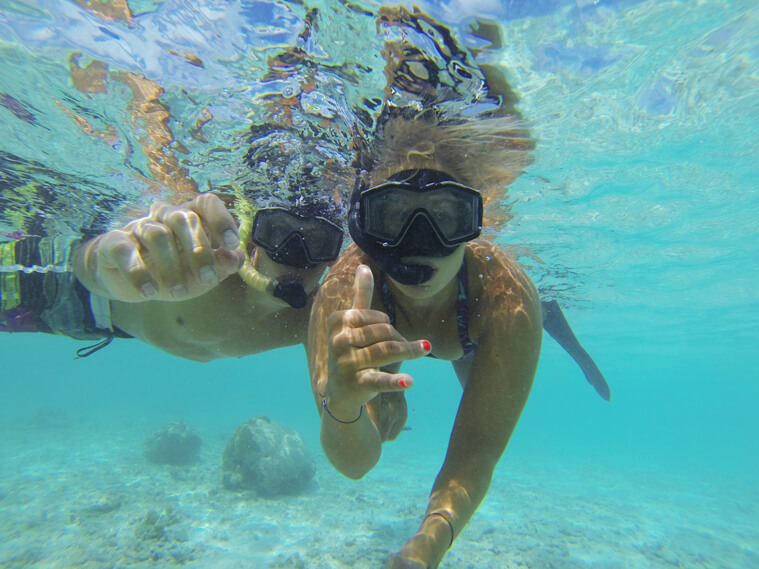 The moment we set out to our yet biggest adventure

Fast forward to a few weeks later. I don’t know how I got the courage together but I decided I would go back to Dominican Republic with my brother. He decided and after one week of struggling, thinking what society would think about me, what my friends would say about that crazy decision – I simply went for it.

I think if it wasn’t for my brother I might not have done it. But just knowing that he did it gave me the strength to just go for it as well. I worked a few different jobs, mainly as a graphic designer and pretzel seller at the famous beer festival called Oktoberfest (oh yes, glorious times!) and got enough money together to buy my first and only kite and book my flight to Cabarete.

Sharing the apartment – and the biggest passion

And suddenly, there we were, the two of us sharing an apartment and sharing the love for the same sport. It was us against the ocean, us against all those new impressions, a new language, a new lifestyle we didn’t even know existed. No matter what happened on the water or on land, we were there for each other and there was no person in the world who could understand it better than him. 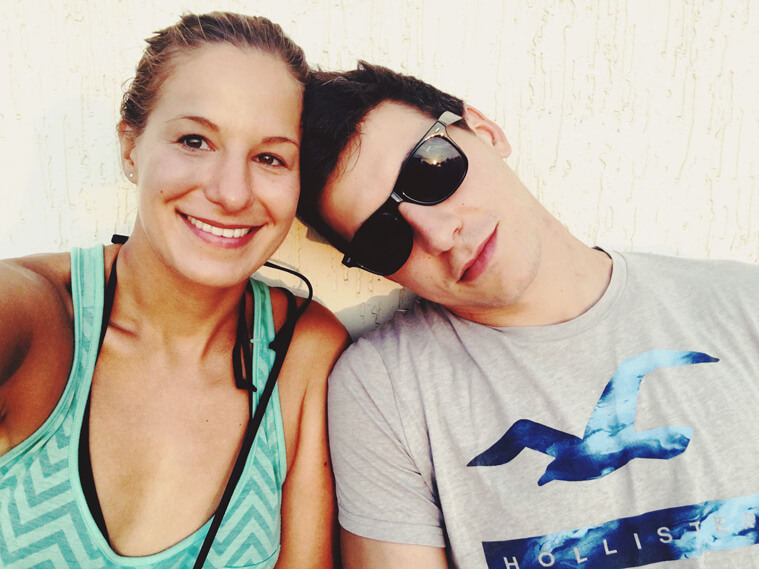 Living and kiting in the Caribbean together changed everything for us

Even now I can say, that year was the best of my life. I think in a way it was for both of us. The ultimate freedom, living a life we wouldn’t even have dared to dream about, being at the beach and ocean every day, making what felt like ten times more experiences that we would have if we stayed at home. Living together on an island, sharing a passion that none of our friends could share – it glued us together. And still does.

Chasing the wind together

I can’t even list the kite holidays we went on together – Brazil, Venezuela, Los Roques and Limnos definitely being the highlights of our travels. I’m so incredibly grateful to have someone so close to me that shares the same addiction for a sport! At the same time, we keep pushing each other to new levels. We kind of became the perfect kite and travel partners. And funny enough: this video was filmed where it all started – the love for kitesurfing and the biggest connection in our lives. Hope you enjoy watching it:

The Video was filmed with a DJI Phantom 3 Pro and a GoPro 4 by my brother, mom and me. Video edit by my awesome brother Action Edit. A true family movie as I said 😉

In the meantime, enjoy my brother’s little edit from Limnos in Greece – or check out our video in Prasonisi with synchrone jumps. But let us tell you this: the best is yet to come! We don’t even know where our journey will still lead us to but we know it will be an epic and unforgettable ride!

> Still need inspiration on where to go on your next adventure?

Check out the guide on my top 10 kitesurf spots or my detailed spot guides about the destinations I’ve visited so far.

> All settled and ready to pack?

Here are my tips on how to pack and travel best with kitesurf luggage and how to find the best flights when travelling with kiteboard baggage.

> Thinking if you got everything you need for your next kitesurf trip?

These are my favorite kitesurf gadgets I love to take with me on salty adventures.