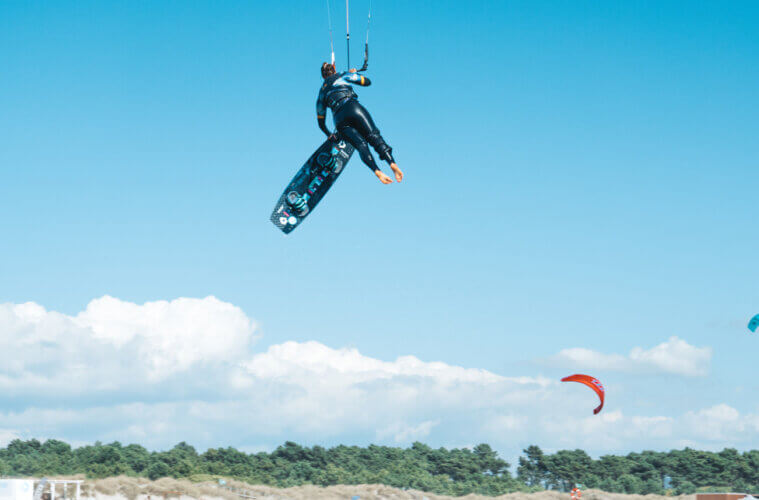 Progress in kitesurfing: how to get to the next level

wakeupstokedApril 6, 2017
Kitesurf LifestyleKitesurf Tips15 Comments 0
No matter which level you’re at, this is a simple guide on how to progress with your kitesurfing skills and push yourself to the next level – whether it’s trying toeside for the first time or going unhooked for some freestyle tricks.

1. Set a goal and get inspired

What tricks do you want to learn? According to the conditions it might be better to have 2–3 tricks on your mind that you want to learn. Some might work better in low wind, some better in strong wind.
Kitesurfing has so many possibilities, it’s a whole universe of its own! Still lacking inspiration? Ask your kitesurfing friends what trick they would recommend for you as the next step or just check out what other tricks kiters on the water are doing. 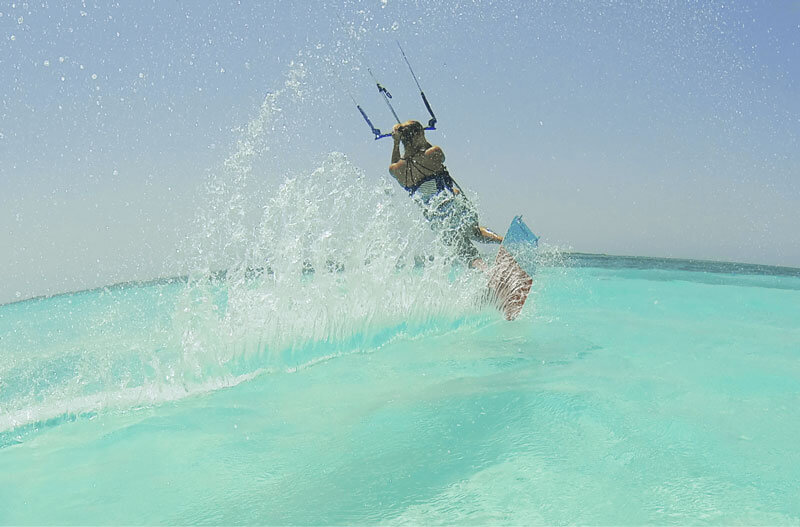 My favorite ones: Progression

This is the key – my favorite being the Progression videos since they explain every trick in detail from different perspectives. You can either check out their free videos on youtube or buy single tricks or collections as DVD’S or in their app.

You can also just scroll through youtube, there are some really good tutorials for some tricks and everyone highlights different aspects of the trick that might help you. Watch the videos a few times and always focus on different things like position or movement of the kite, how the body is moving, how the board is being moved and how everything is timed.

Another great App to use is the North Kiteboarding Academy – they have tutorials for Beginners, Hooked and Unhooked Tricks, Surf and Foiling.

3. Use equipment you know and feel comfortable with

Go out with equipment you already know and have tried in low and strong winds. It goes without saying: know how to do the self-rescue (if you don’t watch videos like this one and practice it). If you have new equipment just give yourself some time to get to know it again and then go for the new trick. 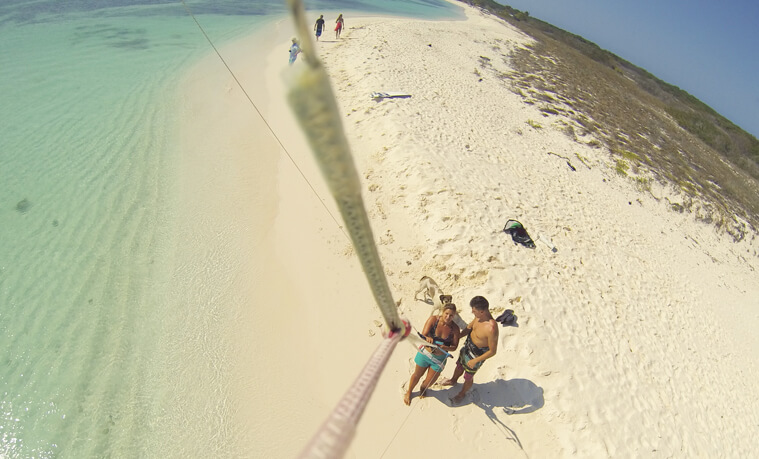 4. Ask friends or kiters that you see doing the trick nicely on how to do it

If it’s a trick that feels hard to learn for you, ask as many kiters as possible how to do it. Same as in the videos, everyone will explain it a bit differently and it might just click at some point or you will remember the words while you’re on the water trying the trick.

5. Visualize how you will do the trick step by step

Our mind is incredibly powerful over our body and this is your first step to success! Visualize how you will stand that trick, how you will move your body, the kite and the board.
Really believe that you can do it. Pretend you can already do it. Imagine every single step in your head and most importantly, imagine the smile on your face after you stood that trick. Your body does what you ultimately believe in.

6. Choose the right conditions to try your new tricks

That’s why I said it’s good to have a few new tricks you want to learn in mind – you can’t always influence the conditions. If you’re super powered on a 7 it will be hard to do an unhooked trick for the first time since the kite is super reactive and you’ll probably pull it into a direction you don’t want to. If you want to try a dark slide for the first time, it will be way harder when the water is super choppy.
Also, make sure there is someone watching out for you or there is a rescue boat, just in case.

7. Go with a kite buddy that tries new stuff as well

This way you’ll both encourage each other to really go for it and not find excuses. And you’ll see that your buddy is probably just failing as much as you do. Reward yourselves with an after-session-beer and talk about your worst crashes – way more fun this way! (My progress kite buddy is my brother – I mean just look at his face on that photo, how could you not stay motivated 😉 )

8. Have a friend to watch and correct you

If you have the opportunity, ask a friend who can do the trick already to watch you and give you advice on what you’re doing wrong. Or simply ask your friends after your session, explain them what you struggled with and they will probably have a tip to help you.
If you’re a very visual person it’s a good idea to have a camera film you. Then you can watch it later, see what you did wrong (or have someone experienced tell yo) and then correct it the next session. 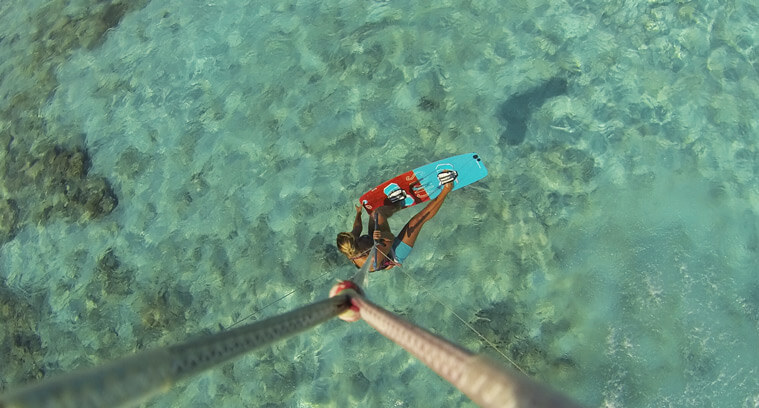 9. Go for it while you’re still fresh and motivated

Try the new stuff at the beginning of your session. It’s way better to try when you still have a lot of power and not when you’re already tired from an hour of kiting.

There can be a mindset of timidness, that you see in some kiters (a.k.a. ME!) . They want to try something but never actually give it a go. Or worse: they still try half heartedly. Be prepared to make mistakes and crash. Those mistakes will help you progress and succeed. Go with it and overcome your fears.

Out of my experience I usually land a new trick the best when I try it for the first time and don’t think too much about it. When I go for it the second time I usually think too much and it gets worse. So as weird as it might sound – after all the preparing and watching tutorials – it personally helps me to switch off my mind and just go for it.
If I realize that I don’t dare to really keep trying, I just always count down from 3 to 1 and make myself go for it when I counted down. That’s my personal technique for being a bit of a chicken when going for new stuff ?

12. Prepare to fail – then it doesn’t feel like failure anymore!

The chance that you will land your trick the first time you try it is – small. Just see it as part of the process, failing your way forward until you succeed.
What I do is promising myself that I will crash at least 10 times before stopping to try for the session. This way it doesn’t feel so bad cause I’m just counting down. And usually I’ll keep going after anyway cause the initial fear is gone.

13. The absolutely most important thing: have fun!

Do it as long as it’s fun and see it as a game. It can be frustrating not too learn a new trick but just see it as part of the game and take it with a smile. Everybody is failing when trying new stuff, you’re not the only one! Plus, your brain will rate the failure differently if you’re smiling (even if it’s just a fake smile) and you’re more likely to stand the trick next time!

And if you just had a bad day and don’t feel like crashing then just try the new trick on your next session and go for some fun stuff that makes you feel better! It’s not a competition, the time on the water is your time and you can decide freely what you’re feeling like! 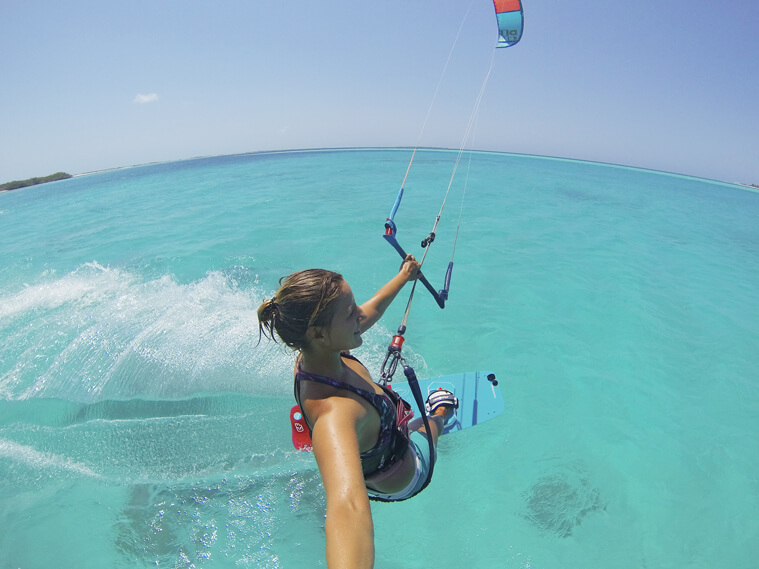 When you take a break from your session just check out if any other kiter is doing the same trick you want to learn. There is nothing like watching it in the real world and it will help your mirror neurons to do the same!

Basically your mirror neurons aka brain and therefore body copy any behavior they see in the real world so this also goes for kitesurfing. And they become active as soon as you 1. watch someone do it 2. try it yourself or 3. think about doing it. So use your brain’s power to learn the trick more easily!

15. Take a break but keep trying on your next sessions

It’s easy to give up and yes, sometimes it can be frustrating. If you feel like it’s no more fun: take a break and do some tricks you enjoy doing and just try again next session. Sometimes it magically works on the next session. But keep on going for a few sessions and keep practicing, this is the only way to get there. Once you get the trick, it’s the best feeling in the world.

You made it? Congrats! Now is the time to start celebrating yourself – and think about the next move ?

> Your next kite session is just ahead?

Here are my top tips on how to make the most out of your session – no matter what the conditions are like.

> Wondering where those paradise-like photos are from?

They are from my trip to Los Roques, Venezuela. This really is what kitesurfing heaven looks like and no matter how often people told me how awesome it was, it was even way more mind-blowing when I was there myself. Check out the full spot guide here.

> Do you want a daily dose of salty and windy inspiration?